Bubble Soccer, also known as bubble football, trendy European sports. Before starting, the players upper body wrapped in a transparent plastic ball in space, revealing only the legs to run, play sports. Upper body breaks the space ball game players body collision probability, although the space ball played a very good protective effect, but the ball too much space in space result in a collision between the ball and the ball is increased, since the hands are fixed, the participating players more balance difficult to grasp. When players fall, he will be bouncing on the ground, the players on the field so clumsy movements amusing. Bubble football game goal is no longer important, the opponent is knocked fun. 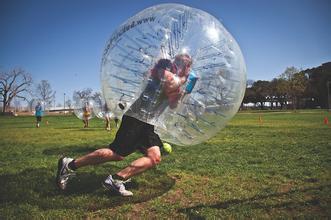 Bubble soccer canada have fun, low technical requirements. Soccer goal on the game itself is very easy, the case where the upper body is space ball player wrapped his hands were tied, poor balance goals as a luxury. Instead, the player loses balance on the ground bouncing, rolling east to west turn clumsy action game adds a lot of fun. The soccer competitive sports event into a fun game sport, loved by the public.

1, material preparation: a blower, a number of inflatable space ball, a football.

2, site layout: flat and clean place to be.

3, the number: 4-10 generally by the individuals, the number of uncapped (that affect the size of the venue)

Discard the traditional football games are played, the non-professional fans can get involved to improve public participation. The goal is no longer the sole purpose of the football game, soccer game Bubble soccer adds fun and playability. Bubble football people can relieve work pressure, life more fun for the game participants. Thus, the trendy sports on a pass to get the majority of the participants received.